Often travellers have many doubts about the best seasons to visit Southeast Asia …. let’s clarify.

The Monsoon is a seasonal wind accompanied by changes in atmospheric circulation and precipitation due to the heating of land and sea.

On earth, there are many monsoon areas: the Gulf of Guinea, the Gulf of Mexico, Venezuela, Australia, Somalia, Spain, Portugal and northern Russia, but the area with the heaviest monsoon is Southeast Asia, owing to the huge continental mass. 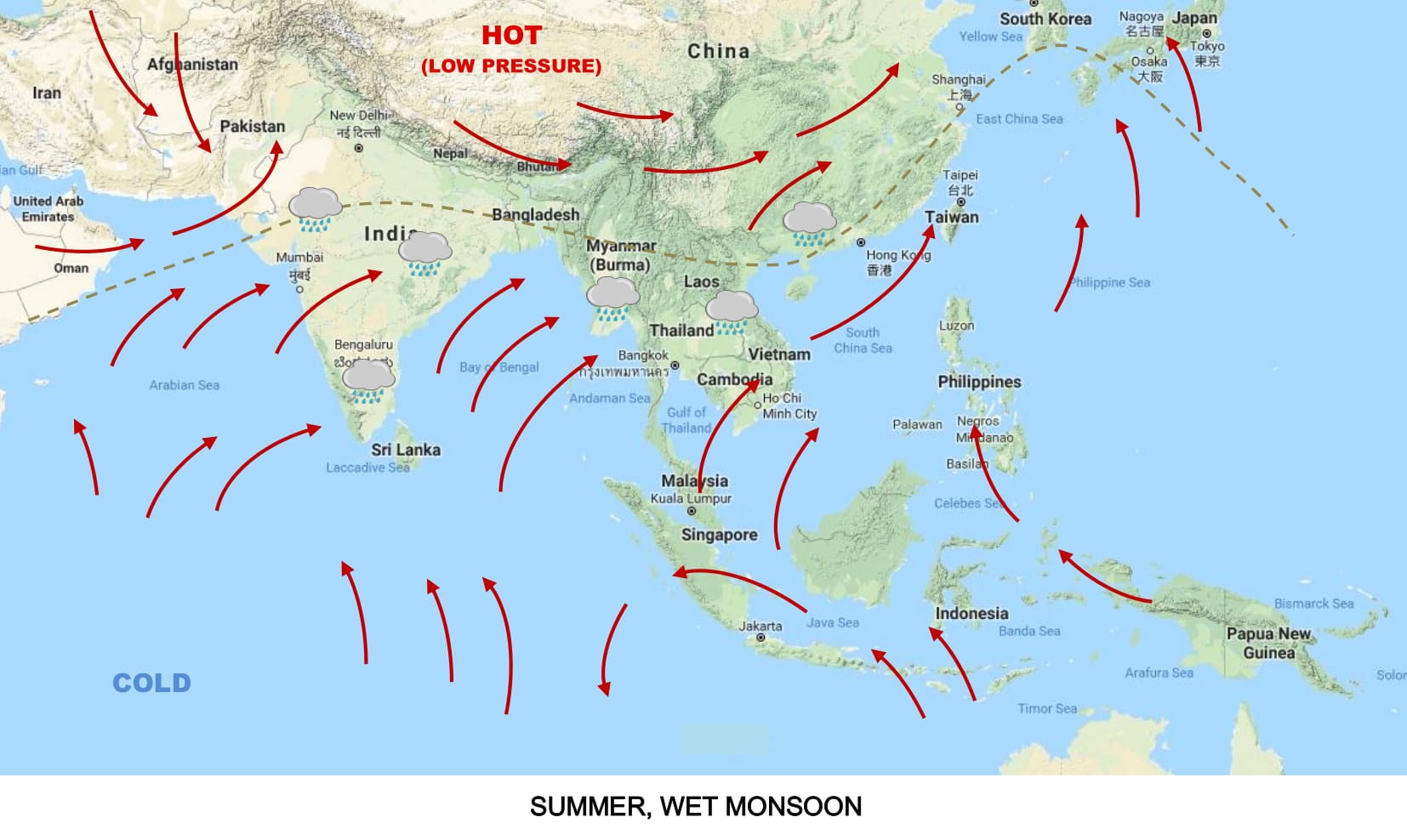 In the summer season, the Asian continent is warmer than the sea, becoming a low-pressure zone and creating fresh and humid winds from the sea, with heavy rainfalls. 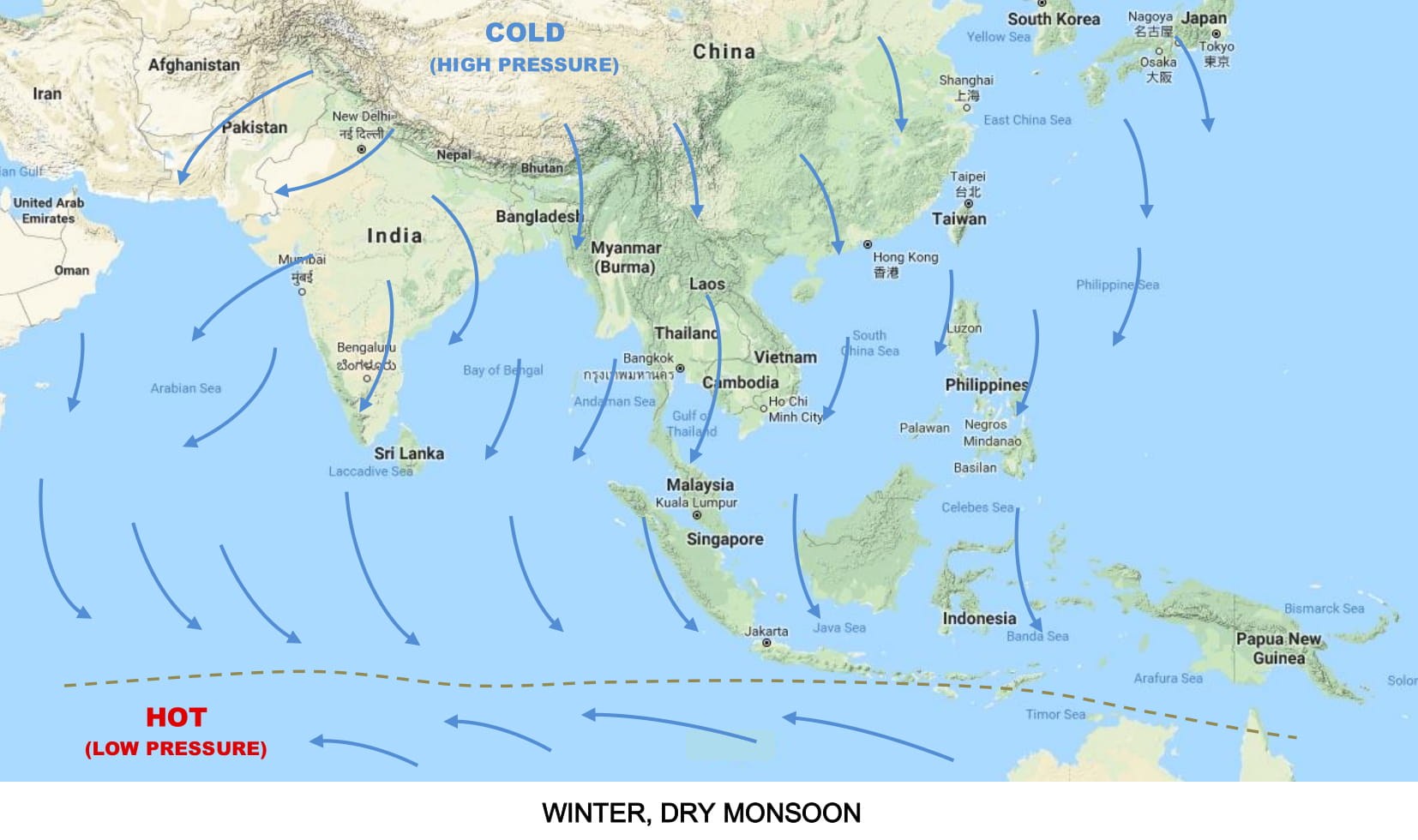 In the winter season, the Asian continent (high-pressure zone) cools, while the Indian Ocean (low-pressure zone) keeps their waters rather hot, creating dry and cold winds from the continent to the sea.

Southwest: from December to March
Northeast: from April to October

NEPAL
from September to November

MYANMAR – BANGLADESH
from November to February

THAILAND
North: from November to February
South: from March to May

LAOS – CAMBODIA
from November to February

VIETNAM
South: from December to April
Central Coast: from June to October
North: from May to October

MALAYSIA – INDONESIA
from May to October

The colorful flags, originated with the ancient Tibetan religion bön and typical of the mountain areas of Tibet and Himalayas are not ornaments or even simple flags: they spread wisdom, peace, strength and wellness to all living beings.

Their high altitude position is not accidental: the blow of the wind touches the prayers printed on the flags and the air is purified by the mantra, spreading all the virtues in space.
The five traditional colours are placed in a specific order from left: blue, white, red, green, and yellow. They represent the five elements, which balanced, produces harmony and health:

Since they are sacred, the flags should be treated with respect: they should not be placed on the ground or used for other purposes.

Also known as The Door to Hell, the Darvaza Crater, is a natural gas crater in the Karakum Black Sands desert, Turkmenistan, about 250 kilometers north of Ashgabat.

It was formed after the collapse of a natural gas field into an underground cavern. According to most sources, it is burning since 1971, when Soviet geologists set it alight to prevent the spread of the potentially poisonous methane gas.
The scientists believed that the gas would extinguish within a few weeks, but it is now still burning.

The Canadian explorer George Kourounis was the first scientist descended into the crater, collecting some extremophile microorganisms that live even in that hellish place.

Capital and biggest city of Thailand, Bangkok holds the Guinness World Record for the longest name: his ceremonial name “Krung Thep Mahanakhon Amon Rattanakosin Mahinthara Yuthaya Mahadilok Phop Noppharat Ratchathani Burirom Udomratchaniwet Mahastan Amon Phiman Awatan Sathit Sakkathattiya Witsanukam Prasit” means “City of angels, the great city, the city of eternal happiness, the impenetrable city of God Indra, the magnificent capital of the world equipped with precious gems, the happy city, abounding in a great Royal Palace, which is similar to the divine house where reincarnated Gods reigns, a city blessed by Indra and built for Vishnukam”
Boundless, hot, smiling and animated by a vibrant nightlife, Bangkok has been elected by the magazine Travel + Leisure the “best city in the world in 2008”.
Don’t miss to taste the typical street food and watch a ping-pong “match”…
The Adam’s Peak (Sri Pada), located in the central-south area of Sri Lanka, is one of the most important places in the world for religious pilgrimage.