Skip to content
The gigantic blue whale is the biggest animal on earth: up to 30 meters long and 150-170 tons of weight (like about 2000 men!). Its tongue can have the same weight as an elephant and its heartbeat can be detected from more than three kilometers. 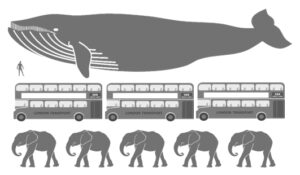