Skip to content
Everyone knows Yellowstone, located in the northwest area of Wyoming, for bison, geysers, Yogi Bear and the beautiful natural formations, but one of the most fascinating aspects of this place is hidden under the ground: the Yellowstone caldera (volcanic crater formed after the collapse of an empty magma chamber) is one of the few supervolcanoes on the earth, formed after the Lava Creek eruption, approximately 630,000 years ago, and now located in one of the so-called earth’s crust hot spots, where the magma goes through the earth’s mantle and approaches the surface. The caldera measures approximately 50 kilometers long and 75 kilometers wide.
It is supposed that the destructive potential of the Yellowstone caldera is thousands – maybe millions – of times higher than the atomic bombs dropped on Hiroshima and Nagasaki during World War II.
A 22° halo (known also as moon or solar halo) is an optical phenomenon, forming a circle with a radius of approximately 22° around the moon or sun, produced by reflected/refracted light interacting with millions hexagonal ice crystals suspended in the cirrus or cirrostratus clouds (troposphere, 6-13 km high).

No light is reflected towards the inside of the ring, giving it the impression of a big hole in the sky. As the sailors say, when the 22° halo appears in the sky, a storm is approaching.

In clear sky conditions the view of this phenomenon is spectacular: the one in the photo (taken in Thaba-Tseka, Lesotho) is a lunar halo, much rarer than the solar halo.

Sir William Wallace (1270-1305) was a Scottish knight, member of the lesser nobility and the main leader during the wars for the independence of Scotland. He became the national hero and the symbol of the Scottish people’s freedom.

The execution of Wallace was one of the roughest of the history: after his capture by the English army (5th August 1305), on 23rd August 1305, at the Tower of London, he was stripped naked and dragged through the city at the heels of a horse, then he was hanged but released while he was still alive, eviscerated (his bowels were burned), beheaded and then cut into four parts.
His head was placed on a pike on the top of the London Bridge; his limbs were displayed, separately, in Stirling, Berwick, Newcastle and Perth.
William Wallace was the protagonist of Blind Harry‘s epic poem “The Wallace” (1479) and Mel Gibson‘s movie “Braveheart” (1995), winner of five Academy Awards. The English heavy metal band Iron Maiden dedicated to the story of Wallace the song “The Clansman” (1998) and the German band Grave Digger dedicated him their song “William Wallace (Braveheart)” (1996).

Known all over the African continent, the “big 5” expression refers to the five most dangerous animals at the time of hunting safari: LION, ELEPHANT, RHINO, LEOPARD and BUFFALO.

They all can be found in many African parks and reserves (particularly in South Africa, Botswana, Tanzania, Kenya, …) or, more simply, on the South African bills (with 380 Rand you will have them all).

One of the most fascinating trips through the South American continent is definitely the one undertaken by the medical students Ernesto “Fuser” Guevara de la Serna and Alberto “Mial” Granado, began with a motorcycle (nicknamed “la Poderosa”) in 1951 from Buenos Aires (Argentina), through much of the Latin continent, to Caracas (Venezuela).
It was after having embarked on this trip that Ernesto Guevara de la Serna knew what would have been his future…  becoming the revolutionary worldwide known as Ernesto “El Che” Guevara. 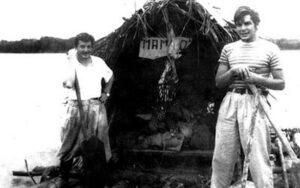 Ernesto Guevara told this experience in the diary Latinoamericana (Notas de viaje) from which, in 2004, was made the cult movie “The Motorcycle Diaries”.
Today the remains of Guevara are kept at the mausoleum of Santa Clara (Cuba), where the following quote can be read:
“One thing I’ve learned in Guatemala of Arbenz was that if I had never been a revolutionary doctor, or just a revolutionary, first there should be a revolution”
Ernesto “El Che” Guevara.
The Adam’s Peak (Sri Pada), located in the central-south area of Sri Lanka, is one of the most important places in the world for religious pilgrimage.

The climb is about 5.200 steps (!).
During the Yugoslavian civil war (1991-1992) Dubrovnik was hit by about two thousand bombs.
After the war the city was rebuilt with traditional techniques and original materials; now the splendor of Dubrovnik is reflected in the white marble of its old town, one of the medieval villages best preserved in Croatia and in the world.